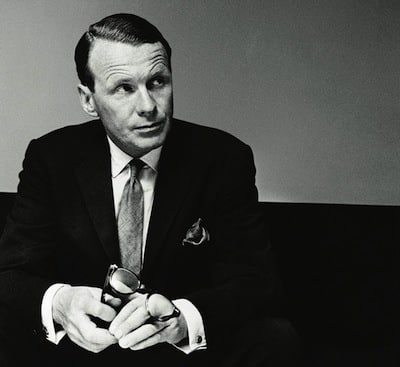 David Ogilvy is considered the father of modern advertising. In his illustrious career as a copywriter, and later managing partner of the world-famous Ogilvy & Mather, Ogilvy created a wildly successful body of work including iconic advertising for Hershey’s, the island of Puerto Rico, and Merril Lynch. He is said to be the inspiration for Don Draper from the show “Mad Men.” Some of the parallels are striking: a man born from humble beginnings in a remote Scottish farming town takes a job as a door-to-door salesman selling cooking stoves, eventually landing a job at London advertising agency Mather and Crowther. In 1938 he emigrated to America and started working as a researcher for the Gallup agency. During WWII Ogilvy worked for the British Intelligence Service where he mastered the art of propaganda while working at the British embassy in Washington D.C. But it was through his partnership with Hewitt, Ogilvy, Benson and Mather, setting up shop on Madison Avenue in 1948 that he truly made his mark and started a career that would last over four decades. His joie de vivre for life makes me think he is more Roger Sterling than Draper.

Ogilvy was a proponent of an early form of native marketing. He made ads that did not look like ads. The concepts of testing and analysis run rampant throughout his book. Clever copy and artistry are eschewed for results and his belief that the wrong advertising can actually reduce the sales of a product. He states again and again the sole purpose of an ad is to convince the reader to buy, nothing more. Ogilvy far and away preferred the soft sell approach and yet he was known for many years for the length of his ad copy, placing hundreds of words of text below his beloved call to action headlines.

“Ogilvy on Advertising” was written in 1983 and shows a slice of life of a world that was just starting to use computers and television had emerged as king. The prism through which he ran his business for decades can be seen through four basic principles: creative brilliance, research, actual results for clients, professional discipline.

Creative Brilliance
If he had any advice to aspiring copywriters it would be to study your product, study your competitors, determine your positioning, decide on your image. His intent was to, “make the product itself the hero of your advertising. If you think the product too dull, I have news for you: there are no dull products, only dull writers.”

As a man who started his career as a copywriter he understood all too well the hole in the pit of your stomach as you type each word. It is constantly with you as, “the copywriter lives with fear. Will he have a big idea before Tuesday morning? Will the client buy it? Will it get a high test score? Will it sell the product? I have never sat down to write an advertisement without thinking THIS TIME I AM GOING TO FAIL.”

Through it all he was evenhanded with his scribes. The mentality of a writer is mostly pure ego surrounded by a fragile shell and, “even the best copywriters are preternaturally thin-skinned. When you have to reject their work, do it gently, and praise them to the skies when they perform well. They are the geese who can lay the golden eggs. Inspire them to keep laying.”

Research
What can you learn from Ogilvy on research? Without working in advertising, I could not begin to estimate just how many of his statistics translate to today’s world, but most of it feels stale. The longest section of the book delivers one long white paper filled with a litany of statistics on measuring every type of advertisement he’s handled. Just a few to cherry pick:

Ogilvy enumerates in painstaking detail what to do with these statistics and how to come to actionable insights to sell product. The modern marketer has to view what he is writing with a skeptical eye. Some of his concepts are simply outdated, i.e.: the longer the copy, the more effective the ad. The point is not whether those same concepts apply in a connected world marketplace where more people on earth have a cell phone than an indoor toilet. The point is he was taking a scientific approach to his work with the data he had available. That strategy would have translated to the modern day.

He leaned not only on his research department but also his direct marketing department to formulate his strategy. Direct marketing departments were his secret weapon against ineffective ad strategy for they always tested everything they did and knew what the ROI of every marketing action was down to the penny. Bring him the numbers, always the numbers, give him results to measure, and he would impose on his copywriters, his sales force, every employee down to the secretarial pool, a professional discipline based on quantitative analysis. In short, he ran his agency on analytics before big data ran the world. The man would have had a field day with Google Ad Words.

Actual Results for Clients
So, in his view, what was a good advertisement? Was it, “an advertisement which pleases you because of its style, or an advertisement which sells the most? They are seldom the same.” For Ogilvy, the most successful companies were those that best differentiated their product or service and they could do this in one of two ways: a lower price or having the best reputation for quality or service. If you wanted to get a result for a client you always had to make a claim why a customer should purchase a product and these were the two primary value propositions. He writes, “advertising which promises no benefit to the consumer does not sell, yet the majority of campaigns contain no promise whatever.” This was definitely his pet peeve. He bashes you in the skull dozens of times to get that concept to sink in.

One of the more interesting aspects of the book was that a man so wildly successful, even with his dedication to analytics, testing, and research, he still could not for the life of him determine which ad campaign would be a hit, much less make the biggest contribution to brand equity over a period of years. In this, he had to resign himself to rely on judgment and instinct. Some of the time, he just got lucky.

Professional Discipline
Ogilvy believed in hard work, but he was far from being a punitive taskmaster. He wanted a convivial environment where people were free to have fun and relax. He excised gloomy people out of his agency. In this he had a modern mentality when it came to running the workplace. He could be very forgiving, patient, as well as strategic. He also mentions having the courage to fire non-performers at least a dozen times.

Ogilvy came from humble beginnings and never went to college. He thought there was a distinct difference in what made a good leader and what made one a good student. He celebrated unorthodoxy and the nonconformist. The qualities he looked for in his leaders were those who, “…always exude self-confidence. They are never petty. They are never buck-passers. They pick themselves up after defeat.”

Ogilvy wanted employees who were broad minded and well-rounded. What he wanted in a staff was to, “…recruit people with a wide range of talents. An agency should be like an orchestra, able to play anything.” His descriptions of the qualities he looked for in the various staff personnel reads less like a resume and more like a dossier. He was rather precise in the attributes he wanted from people. He would hire from a long list of bullet points and was seldom disappointed with his choices.

A whimsical topic Ogilvy touches upon was the spate of chronic alcoholism from a great deal of his subordinates and partners. He even had a set routine preplanned for dealing with alcoholics including sending them to dry out at private clinics. Those clinics must have made a fortune from inpatient services simply from the ranks of his agency. I get the feeling that Ogilvy would have handled Freddy Rumson or Don Draper with the tact of a Roger Sterling.

The best writing in the book was reading Ogilvy’s enthusiasm for the advertising pioneers who came before him. His list of biographies of the names of advertising’s giants reads like a love poem. My favorite: Claude C. Hopkins, 1867-1932. Ogilvy writes:

Hopkins was a prodigiously hard worker, seldom leaving his office before the early hours of the morning. Sunday was his favorite day, because he could work without interruption. From his typewriter came campaigns which made many products famous, including Pepsodent, Palmolive, and six different cars. He invented ways to force distribution for new products. He invented test marketing. He invented sampling by coupon. He invented copy Research.

Ogilvy was critical when it came to political advertising, noting there were nine Federal agencies which regulate advertising and none has a say in the lies, deceptions, unfair statements, and malicious accusations found in the political realm. It should also be noted that Ogilvy despised highway billboards as they were responsible for three times as many accidents as highways without. He is quite vociferous on the issue. Wonder what he would say about texting while driving?

Ogilvy only briefly touches on some of advertising’s limitations as advertising, “…can persuade people to buy inferior products…once. But the consumer perceives that the product is inferior and never buys it again.” In short, his best strategy to increase product sales is to improve the actual product. Easier said than done. The marketplace is filled with products that use the same manufacturing, same components, same type of packaging. In short, there exists an entire universe of products that are for all intents and purposes, the same. I think he passed the buck with that one. If a functional product does not sell, the implication was that the advertising must have been ineffective, if not, why else did the product fail? A bit of circular logic, but I’ll let the matter pass.

The book has an infectious optimism for capitalism as Ogilvy’s incorporation of ideology and business blended seamlessly. A strong sense of workplace esprit de corps, an appreciation the mysteries of the creative process, and a homage to standing out vein throughout the chapters. It is interesting to note that in 1966 Ogilvy & Mather was the first advertising agency to go public on both the New York and London Stock Exchange. In 1969 they were the first agency to work with the Hershey company, a coup that launched the company even further into the stratosphere. Ogilvy died at his home in France in 1999.